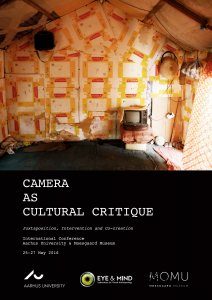 In this conference we investigate the potential of visual media to convey and respond to existing aswell as emerging social realities. We aim to contribute to an interdisciplinary field of research and practice that includes anthropology, philosophy and visual art. The visual media we wish to discuss range from photography and film to digital media, audio-visual installations and exhibitions.

Building on a tradition of critique in cultural anthropology, we pursue styles of knowing that reach beyond conventional text-based academic knowledge, using practice-led methods that develop their own forms of representation and criteria of validity and open new affinities to the world of art. We claim that concepts of critique are essential in this endeavour, providing the reflective grounding for our experiments and interventions in contexts and questions beyond their immediate sphere of impact and relevance.

We organize the workshop under three subheadings that suggest key elements in these alternative styles of knowing:

Juxtaposition
What should we understand by cultural critique and what is the potential of visual media for critique? Can we go beyond juxtaposition and epistemological critique to create distance and untimeliness, while fostering (re)engagement and dialogue? How can techniques of recording, montage, feedback, exhibition, etc. create spaces for reflection and critical revaluation?

Intervention
Every expression of art and every act of knowledge creation can be seen as a form of intervention in social reality. This opens questions regarding intentional authorship and perspective. Foregrounding the act of visual intervention as a privileged, multi-sensorial method of producing, grasping and articulating often non-verbal social relations and situations, we consider the ways in which such interventions may prompt transformative agency.

Co-creation
In spite of many programmatic statements and acknowledgements of debt to informants, collaborators, and participants, the creation of substantial frameworks and methods for co-creation is still an underdeveloped field within the social sciences. What does co-creation imply and how may we conceptualise the processual and dynamic practice of cross-cultural and multi-disciplinary cocreation?

The conference is organised by the research group Camera as Cultural Critique based at the Eye & Mind Laboratory for Visual Anthropology at Aarhus University and Moesgaard Museum. This four-year research initiative (2013-2016) investigates the potential of using visual technologies and methodologies in social science research in practice. We collaborate with a variety of international researchers and practitioners, with the aim of establishing visual anthropology as a distinct form of critique within anthropology and the social sciences in general.