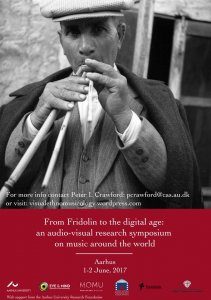 When the Danish ethnomusicologist, Andreas Fridolin Weis Bentzon, died, far too young (he was only 35), in 1971, it was not only a shock to Danish anthropology in general, it was a profound setback for a sub-discipline that he pioneered through his world famous doctoral studies of the Sardinian ‘national’ instrument, the three-pronged flute called launeddas. He would have been pleased to know that his approach is the source of inspiration for a symposium being organized more than 45 years later. He knew that to understand the sense-based phenomenon of music required research methods that went beyond ‘simple’ observation, in his short life managing to produce hundreds of audio-recordings and photographs, and many feet of 16 mm film recordings. It is therefore in his spirit, and in two cases directly referring to his work, that the planned symposium will showcase different projects that all, in one way or the other, contribute to the further development of two areas of anthropological research at Aarhus University, firstly the kind of research that acknowledges the main implications of the so-called ‘anthropology of the senses’, often related to phenomenological approaches, when it comes to practice-based research. Secondly, and linked to this, the ways in which notions of visual anthropology and ethnographic film may contribute to such research.